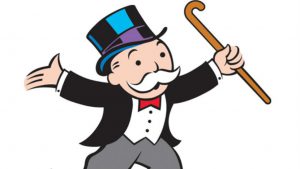 In almost every game ever created you get 1 winner (or winning team) – The rest are losers.

if you have ever played monopoly you know “the breakup game” – you have tried a fast version of capitalism as we know it today.

So yes i believe we will have 1 winner and alot of loosers, sure some might do ok mid game – and due to luck it might take unexpected turns along the way – but always 1 winner, the rest have no money left.

but if that was the case, why has it not happened yet?

well right now we are in the tournament, there are multiple games being played – but the field is narrowing down – when i wrote this the 8 richest persons in the world owned as much as the poorest 3.6 billions (http://money.cnn.com/2017/01/15/news/economy/oxfam-income-inequality-men/)  – so basicly 8 people own as much as the poorest half of the world.

look at Apple, Google, there is no slowing down, it is moving faster and faster.

So this is the end, but how will we get there  ?